Many thanks for a good game all, and thankyou to the hosts. You did a great job.
I like the current anonymous scoring system, though can we have a description field with each disqualification nomination? I'm a bit alarmed that I received one and would like to know why.

I wrote up a postmortem for my game... you can check it out at http://www.robo-murito.net/code/ld48_2005/postmortem.html

Thanks to richard for the website, the work adminning the contest and actually running it!

For people who did t understand how to play my game PureEl please read the instructions :P and if you cant understand how to launch it press the LVD.exe :) thats all oh and i have improved my game and i have the next level ready :D ill impliment him and draw some more art for it :D and it coding time :D yey

well... went to fix that little *cough* *cough* bug that I had in my game only to discover that I deleted everything but a lttle backup I made that saturday afternoon during the compo... o well... always next year to make a game that doens't crash your pc... not intentionally of course :P...

Am I really allowed to post news about bugfixes and improvements I've made to my entry? It sort of defeats the purpose of a 48 hour contest if people keep adding things after the deadline.

Even after my last rant people still wanted one. Well who am I to deny the masses.

The only change I made is the green square is a little less picky about detecting a win. See the pygame version if you really want the origional. Virt no difference.

category: News | permanent link | comments [0]
How is my game not for the PC?

It was made on a PC not a playstation2, an O2 or a palm pilot. It would probably run on all those platform though.

I guess since my game was written in python its target platform is python. But python runs on the PC so what is the problem? At least bitch how there is no exe and knock a few marks of for that. Just do not 'no mark' because you are too lazy to bother.

Anyway my readme explains you need pygame and python. Please RTFM! Because that kind of comment I would expect from a dumb ass user not a programmer. 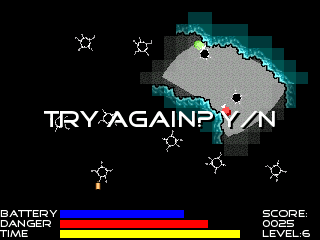 I decided that the gore factor of my last release was a bit high. So I changed the blood to bullet holes. The new effect looks pretty cool.
pygame | windows. 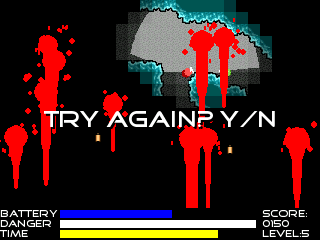 I enjoyed this year's contest even more than last years. I am really enjoying trying out everyone's games, and I'm learning a lot on what I can do to improve my game making skills.

For a longer version of this entry go here.

I've recompiled my game to work on OS X. I bought a Mac mini just for that so I hope someone will give it a try and tell me if everything is working OK.
Download DMG file (1.3MB)

Heh - i guess that my screwup with the testing code seems to have made it so
some people couldnt see how it was linked to the topic For those who left the
comments saying so.. the link is:

The object of the game is to bring light to the dark universe.

Every time you increase the size of your sun (try pressing '=' a few times) the
stars shine brighter. Oh well.. next time ill be extra carefull with the
binary i upload.. sorry for that. :) Besides that i still havent judged
everyone.. very slow process! (i keep getting stuck playing them for too long!)

I've noticed I have a lot of comments saying that there is no AI. If this is the case then I have a rather large bug to fix before I continue programming this game. Is everybody sure they have PixelsFinal.zip and not one of the test versions? Note to Cairnswm: If you feel like finishing Piksels then make sure I get a copy. :)

I've had a couple of comments about Uplighter running very slow, all from people with 3 ghz cpus. Which is weird since it runs smoothly on my computer with 1.8 ghz. I'm pondering whether I've screwed up any of the timing code, but I don't know yet, and thus I have no recommended fix yet either. Update: Codexus has gotten it to work by simply compiling it in MSVC. Here's a link. Thanks Codexus!

Also, Uplighter will, per default, use as much cpu time as it can. Some people do not seem to like this, but it should be easy to fix: Either enable vsync for OpenGL, or try running Uplighter with the -cpufriendly switch.

Well I have finished judging the 36 entries that will run on my machine with what I have.

People should try and include all DLLs required for their game in the entry. A number of games were missing allegro libraries and msvcp71.dll or msvcr71.dll. Thanks to other entries I found the msvc dlls.

I was impressed with the level of entries. I am sure last April when I last entered the level of completeness was lower. Well done everyone.

For those looking for my entry and not finding an EXE it is available from http://www.cairnsgames.co.za/ld48/treasurehunter.zip as my entry continually timed out when uploading. (Richard is aware of the problems I had).

Once again thanks to every one and especially Richard.